Or my old favorite, the Hair Cutting Umbrella

This handy hair cutting umbrella catches those annoying hair clippings that fall down your neck, into your clothes and onto the floor. Imagine no more sweeping or vacuuming. No more itchy, irritated skin. Great for kids or adults. Fastens comfortably but snuggly with a "touch" closure. This hair care product is made of wipe-clean nylon. Folds for compact storage.
I love this catalog so much. For my sister's birthday, I purchased for her their terry romper, but it looked so fun, I bought one for myself as well.

Be careful, though. Sizes run big. A 6-8, which is a medium in most stores, is considered a small here. And sizes go up to 2X. Can you just image a large 2X in a terry romper. Delight!

I received an email advertising a gift basket of bagels, lox, and coffee.
And this got me thinking. I started thinking about the time I sent a gift basket (at least I think it came in a basket) of cookies to Brian's office for his birthday. This was back when I was living in Maryland and he was in Florida. I'm not sure what Brian thought of it, but sending that basket of cookies sure made me feel swell.

So I got to thinking I should do it again. I should send a gift of something sweet and tasty to Brian's office to brighten up his day and make him popular among his coworkers. I got to considering what I might send. Somehow, I found the Junior's cheese cake site, and discovered they could ship a cake in time for Valentine's Day. How nice!

I had chosen the cake I was going to send, established an online account, filled out the billing and shipping information, and was about to plug in my credit card number when I remembered that I hate Valentine's Day.

Phew! Sometimes I get so carried away, I completely forget how much I loathe a thing.

In honor of Valentine's Day, the made-up holiday I hate, I took a picture of love. Here is what it looked like: 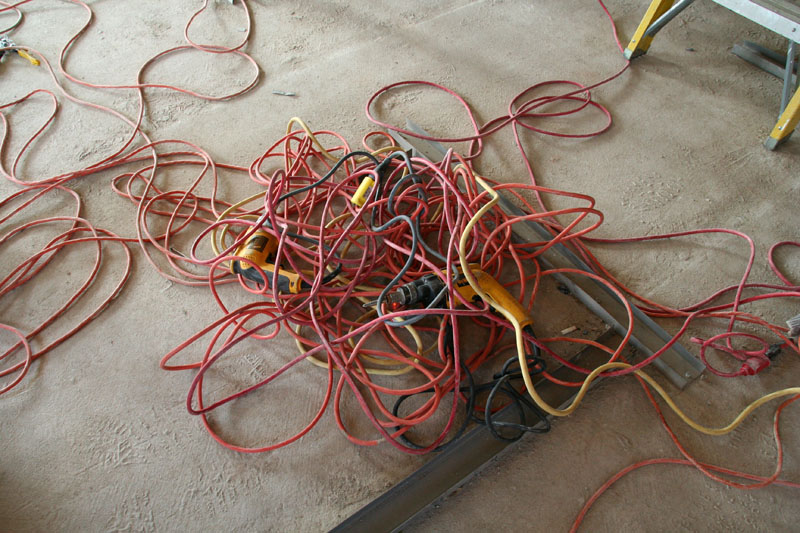 I finished knitting my first hat.
And it looks ridiculous. I guess I measured it all wrong. But lord knows I tried.

I wrapped measuring tape around Brian's head at least a dozen times, and labored over painful and esoteric calculations. Every few days, I would corner Brian again and make him sit while I wrapped a rectangle of yarn around his head and tried to figure out if it fit.

I sewed up the side on Sunday, hid the loose ends, and presented it to Brian. He smiled and put it on, and we could both tell immediately that the hat was no good. It was too big around and yet too shallow. It made him look a little like the Cabbage Head character from Kids In the Hall. Here is a picture of Brian enjoying the wonders of his new green winter cap: 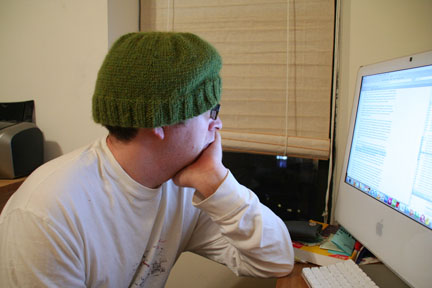 I tried it on too, and we both agreed it looked better on me. However, because it was so big around, it was about as secure on my head as an upside-down wooden salad bowl. One brisk wind and it would be gone. 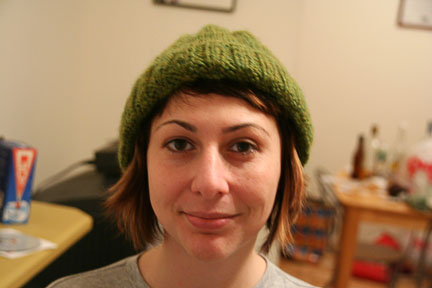 Originally, I had purchased 5 skeins of this nice, cabbage-green alpaca (soft!) wool. My thought was that about 1.5 of the skeins would go for the hat, and with the rest I'd make a matching scarf for the man to whom I am legally bound. I was tortured now as to what to do. Should I keep the punch-bowl-sized cap for myself? Should I make another one for Brian — his and hers matching knitted wool caps? Should I unravel it all and start again?

I decided today that I would begin making another hat for Brian. When I am done, assuming this one is better than the first, I will unravel the first and begin on the matching scarf.

We are all getting older.
But some of us are getting older faster than others. My friend Sam and I met for happy hour last night. Here are some highlights from our conversation:

DEB: Your brother's kind of young to be a CPA, no?

SAM: Not really. He's not that young.

DEB: Do you ever watch that politics show on NY1? The one where that chunky lethargic guy interviews people about local politics?

SAM: No. I've only seen the one about theater stuff. It's pretty bad.

DEB: No. This one isn't about theater. It's about politics. At least, I think it is. There's this guy. And he's—what's the word I'm looking for?

DEB: Yeah, no. That's not it. It's like. Kind of. I don't know. It's a word that means more mentally slow. But maybe also low-energy.

SAM: I don't know what you're talking about.

DEB: Forget it. I don't really remember what I was going to say.

DEB: ... and you know who else was a big supporter of Giuliani? Curtis Sliwa. I thought that was weird.

DEB: Curtis Sliwa. You know. That guy who started that group, the ... I can't remember the name. Damn. I can't think of it. Angels. I think the word "angles" was in the title.

Sam: I have no idea what you're talking about.

DEB: Angels. I think Angels was in the title. Not Hell's Angels. They had red hats. Not Red Angels. I can't remember. I'll text Brian. [some time passes] Brian wrote back. THE GARDIAN ANGELS! That's it.

SAM: What are you talking about?

DEB: Curtis Sliwa, the leader of the Guardian Angels, was supporting Giuliani.

DEB: Sam, tell Brian that thing you said about Huckabee.

DEB: You know, that thing you said about Huckabee being crazy.

SAM: Oh. I don't really remember what I said.

DEB: I don't either.

Happy Chinese New Year!
It's the year of the rat!

And what better way to celebrate the year of the rat than with a dead rat mouse pad!

I saw Steve Buscemi on the F train this morning.
I noticed him right as I was boarding the train at 7th Avenue in Park Slope. I had heard he frequented the pizza parlor on 9th and 7th, so I was pretty sure it was him. But I didn't say anything. I gave him his space.

As did everyone else on the train.

That's one of the nice things about New York City. We are so cramped here, in lieu of physical space, we offer people psychic space. And we do this by ignoring them. People think New Yorkers are rude. We're not. We're actually being generous. With psychic space.

My brother, soon after moving here, once marveled how the city appeared to be filled with a series of little boxes stacked to the sky and filled with people. Someone moves out of their little box, and someone moves in.

There's an anonymity here that can be both terrifying and liberating. I can dress as loudly as I want, knowing that, when I stand on the subway platform, no one will even notice me, because they are too busy not looking at Steve Buscemi or a giant tranny or the crazy mumbling homeless man who smells like urine and isn't wearing any shoes.

Of course, there is always the fear that people will give you too much psychic space. As much generous space as they gave Kitty Genovese.

So the city has over 8 million people, giving it roughly 16 million eyes (minus the profoundly blind and those missing an eye, or those wearing eye patches or who are walking around with their pupils dilated), many of which witnessed yesterday's tickertape parade thrown for the Super Bowl champion Giants. Though I am not really a fan of the New York Giants, I am a fan of tickertape. Here are some pictures:

I sneaked into the AWP conference.
Mostly, I just worked the Smartish Pace table. Though I'm not sure how many units I actually moved.

I took over 300 pictures — many of them painfully blurry — but I haven't gotten a chance to sort through them. I will post only one for now. This picture was not actually taken at the conference. It was taken at Arturo's on Houston Street, and is important, because Clare is modeling an "I (pizza) PIZZA" shirt while eating pizza. Very meta. 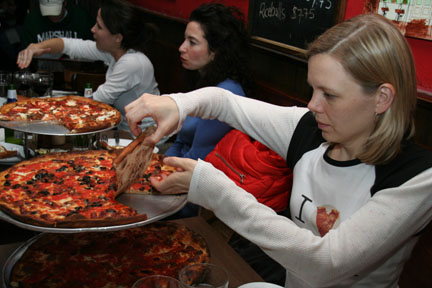 Please feel free to contact me.
You can do so here

( back to top )
the history of debcentral